Two thoughts for this political season

First, I cannot imagine more enjoyable economic history than by Deirdre McCloskey. I just finished Bourgeois Equality: How Ideas, Not Capital or Institutions Enriched the World.  The old questions: How did we get so rich? Why for those in some places and not others? Why all the great improvements since 1800? She cites "the bourgeois deal" -- how commerce and "economic betterment" became respectable after about 1800, especially in the UK and Holland. It's not simply "good institutions" but the right culture. I cannot place who asked, "How do we get a better culture?" The brisk answer was "Get a better history."

Along the way, McCloskey cites Peter Boettke's thought that "the economy involves a continuing struggle among the Three Ss: Stupidity, Schumpeter and Smith." (p. 205). Smithian gains from trade and Schumpeterian inventiveness suggest that economic growth is the natural condition unless stupidity manages to choke it off. Pass more laws, enact more edicts and regulations.

Looking at what the major political parties are up to (I only tuned in for a few minutes to see cheering crowds in Philadelphia moved to tears of joy in response to idiotic banalities from the stage) it may be that stupidity is now in the saddle.  Bourgeois Equality suggests that the first two Ss had been ahead (by a nose?) since 1890. But post-1980?

Second, the WSJ offers this helpful electoral college scenarios cartogram gadget. Campaign managers will play these until the eve of the election. One not crazy scenario shows a Clinton majority by just one electoral vote. Both major party candidates are "high-negatives-with-more skeletons-in-the-closet". This means that as the skeletons tumble out, a very close outcome is certainly possible. This also means that a serious run by Libertarian Gary Johnson, whereby if he wins just one small state, could foreclose an electoral college majority -- and therefore the choice goes to the House of Representatives -- where it is possible that they may actually select someone who does not scare (terrify) people. As I keep saying, many ifs.

Who do you trust?

This week's NY Times coverage of Los Angeles ("The Capital of Car Culture Warms to Mass Transit") was 100% wrong. Wendell Cox and Tom Rubin provide the facts. LA's celebrated rail transit extensions have prompted net losses of transit ridership, the opposite of the Times lede. Elite opinion has a clear idea of how the world should work and this becomes, in their minds, a rendition of how the world does work.

But this is old news. Arnold Kling links to a remarkable essay by Walter Russel Mead here. Give it enough time, and the credibility of elites (not just mainstream media) sinks so low that Trumpism happens. Mead does not mention the candidate but rather the growing gap between "the professional class" and everyone else.

This is not just about income inequalities. It is about the antics of those who are doing well, including their opinions and pronouncements. Hillary Clinton is caught lying to the American people (over and over) and the FBI chief fancy-dances to paper it over. The attorney general just clams up. Bill Clinton escaped perjury charges because his lies to the American people were about sex and, therefore, a lesser perjury. H. Clinton's lies were more serious stuff but no big deal. Now she will save us from Trump.

I support the Johnson-Weld ticket, ably profiled by Ryan Lizza in the current New Yorker.

Wendell Cox reports that the latest data show that there are "Shorter commutes in American Suburbs and Exurbs". He means in terms of travel time, the only thing that matters. This has been known for some time but is apparently counter-intuitive to many. The old Costs of Sprawl notion still lives: spread out cities must mean longer trips -- and more uncompensated externalities. This must mean that central planning ("Smart Growth") is needed -- and will somehow make things better. Anything goes.

But think for a minute. Cities (metropolitan areas) compete for labor and capital. They must provide settings that are attractive. Locators (labor and capital) evaluate sites, contemplate many trade-offs (everyone considers commute times and access to a variety of destinations) and bid for space accordingly. Markets are always there and do not tolerate unsustainable (that word) waste.

As in all other areas (watch Cleveland this week), dumb ideas stick around. They do not stay around forever but often a very long time.
Posted by Peter Gordon at 7/18/2016 07:09:00 AM

I often used the Paul Heyne (now with Boettke and Prychitko) textbook for its many appealing features, one of which is end-of-chapter questions that are far superior to any I have seen in an introductory text. For their discussion of sunk costs, they ask whether casualties suffered in a war can be used to justify staying in the war. The point is that cultural norms may be up against economic thinking. The latter argues for comparing expected (future) costs with expected (future) benefits. But the culture may argue for honoring the sacrifices of the fallen by staying in the fight.

In an "overrated/underrated" discussion of sunk costs, Tyler Cowen cites the culture as a sunk cost not to be underrated. My favorite class discussion head scratcher involves couples tempted to separate but citing all they years they had "invested" in the relationship as getting in the way of a "rational" assessment of whether to stay together. What about all the years already sunk into an academic major connected to an unattractive career (life)? Is it somehow too late to switch?

Private companies shut down the losers. Even public-private ventures throw in the towel on unpromising projects. Airbus may finally cut back on production plans for the A380. Walking away from California high-speed rail will be much more difficult: once a few miles of track are laid, the sunk cost story will be the story. There are no stockholders; bondholders only exist in the promises of the High-Speed Rail Authority which is properly exposed here. (h/t Newmark's Door).

MC=MR static equilibria are standard classroom fare (wonder why do students fail to respond?). But the more plausible model involves dynamics that involve learning from mistakes and error correction. That model includes walking away from mistakes. How else could there be any progress?

Is it "death of distance" or is it agglomeration? It is both. False choices mislead. We keep getting clusters of complementary activities but the new clusters are at lower densities and more spread out.

Today's WSJ includes "Startups Try to Spread Outside of Silicon Valley ... The biggest, best funded companies are still being built, for the most part, in the Bay Area."  This is not surprising. All of finance was never expected to be in Manhattan; all or entertainment was never expected to in in "Hollywood"; all of the auto industry would not be in around Detroit. But these places maintain(ed) leadership. Clustering will always be attractive but clustering with elbow room is better. 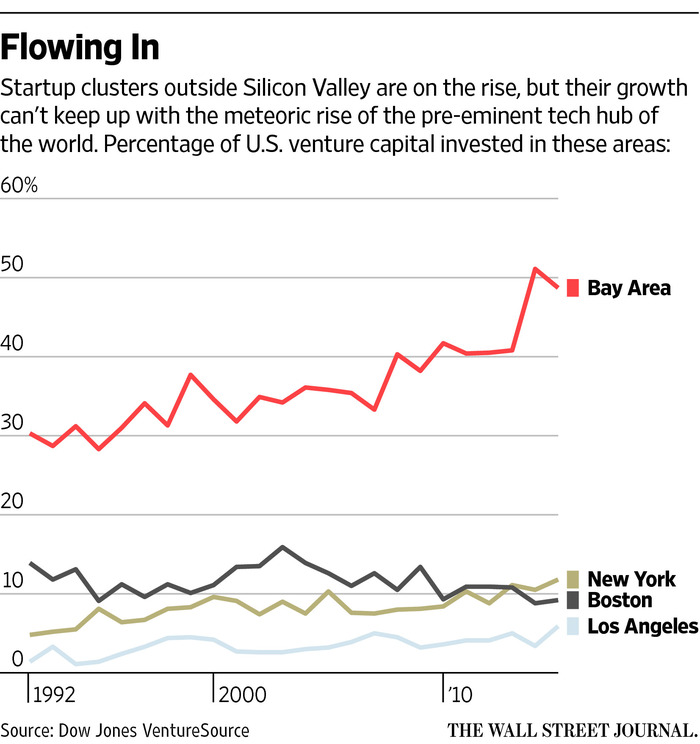 Baumol's cost disease famously calls attention to the fact that when there are reasons to expect steady productivity divergence between sectors, the associated product prices will diverge and this will impact consumption patterns. The fine arts sector, for example, cannot expect productivity improvements to match those in manufacturing. Fine arts prices will rise in comparison to manufactured goods as will their relative importance in people's budgets.

The July 10 NY Times Magazine includes Marie Kondo's Stuff Of Nightmares ... and the ruthless war on clutter". Look at all the garage and yard sales, the rise of the self-storage industry -- as well as the relentless accumulations of stuff in our own homes and offices. A la Baumol, the relative costs of accumulating stuff and the space to house it are systematically diverging and there is no relief in sight.  Easy on-line shopping and delivery only make it worse (cheaper in terms of time). There is even now a National Association of Professional Organizers. The problem is that  city and state governments make it increasingly difficult to build.  Growing housing affordability is a result. But so is the growing problem of organizing and storing all of our stuff.

This is another first-world problem, one that we have inflicted on ourselves.

You have to be quick

"Studies show" that raising the minimum wage has no (or very few) unemployment consequences. This is an approximate version of the free-lunch mantra that some in the dirigiste community have adopted. So, have at it. This is, of course, just convenient rhetoric. There are an uncountable number of everyday substitutions in light of price differences. Their timing is always peculiar.

But anything-goes rhetoric is not a problem. Look at who the two major U.S. political parties are about to nominate for president. Anything goes.

Now it also appears that "A Robot-Run Burger Joint is Coming to San Francisco" (h/t Scott Alexander). "Substitutes always and everywhere" is a truism. The interesting question is how many see the substitute as a good one or a bad one. Demand is wonderfully subjective and market tests are all we have. Fortunately, there are market tests all around -- until and unless some make it their project to outlaw them. Then its a race between the innovators and the controllers (see Uber/Lyft, drones that deliver packages, etc.). Staying one step ahead of the controllers is how progress is accomplished
Posted by Peter Gordon at 7/08/2016 11:39:00 AM


Deng Xiaoping was probably China’s greatest 20th century leader. He turned a very large and very poor country into a very large country that is among the world’s richest (measured by GDP, not GDP per capita). Economic freedom expanded but political freedom not so much. How are the two linked? Is there a “night watchman state” standard for fast-growing large Asian countries that have no western liberal tradition? No one knows.

How to build on Deng’s magic? Land and agricultural policies, not so long ago, were so misguided that millions starved. That was then. But even today, China’s poorest are still in the countryside.  Food has to be imported.

Farmland cannot be owned; it can only be leased for up to 30 years. Here is some land policy history.
Crop plantings that require many years to mature, as well as farm sizes that reap scale economies, are foregone. A recent FT (gated) includes Lucy Hornby’s “Losing the plot … For decades, the country has wrestled with modernizing its agricultural industry, sometimes with tragic results. But as long as the sale of rural land remains illegal, how realistic is it to expect radical reforms?”  Policymakers are trying to import food and even buy land abroad to feed the population. Taking a page from Deng's playbook, more land policy liberalization would help to solve a bunch of problems.

I have no idea about the domestic politics of further reform.  In any political system, reform encounters resistance. How did Deng Xiaoping do it? He started small. First Shenzhen, then the rest of the country. That's the way to go here as well as there.
Posted by Peter Gordon at 7/06/2016 05:09:00 PM