Here is the L.A. Times noting that LA Metro ridership is still falling -- even though billions have been (mis)spent on extra capacity over the last 30+ years. By my count that's the second time this year that the Times has broached this tender topic. As a member in good standing of the LA "good government" (googoo) establishment, the paper had for many years chosen to tip-toe around the bad news.

Readers of this blog may know that some of us began flogging the dead horse in the mid-1970s. Go to the attached proceedings and read the contribution by the late UCLA Prof. George Hilton. He was among the first to write sensibly and clearly that LA is not NY -- and trying to make it so would be a phenomenal waste. But even LA Times coverage will be for naught. Billions more will be spent. Pouring good money after bad is what the great and the good in city hall do for a living.

We are in the the early years Uber/Lyft and all manner of ICT information sharing.  These are the game-changers. For the past two months, my wife and I have graduated from a two-car household to a one-car-plus-Uber-plus-walkable-neighborhood HH. The game-changers are here. Conventional transit was never a game-changer.

Why have economists in the room?

Adam Smith pointed out many years ago "Nothing can be more absurd than the balance of trade." This "balance" (current account deficit) is reported and fretted over regularly. But less noticed is the simple fact that the deficit is necessarily mirrored by an equal and opposite surplus on the capital account.

What are the lessons? The world wants to invest in the U.S. Good news. The "trade gap" proves it.

It would be even better if the federal government (politicians) did not reap the benefits. These "investment opportunities" though attractive abroad (for the most part) do little good.  Far better if foreigners used their U.S. dollars to make productive U.S. investments.

Dan Klein has a forthcoming paper (Independent Review) on "The Joys of Yiddish and Economics." Dan looks at the Leo Rosten classic as well as the essentials of Smithian-Hayekian economics and finds various parallel insights. Smith-Hayek famously noted the information content of prices and the useful embellishments of reputations -- whenever we buy or sell.

The characters that Rosten described were practical men and women. Survival was job #1. They could not afford to neglect practicalities. As such gathering information was fundamental. Where and when they could get it at low cost was part of survival. The humor is usually from the joy of recognition.

Thanks to the web, we now live in a sea of information. But we still engage in gossip (in person and on social media) because trust is always being tested. We network electronically as well as the old fashioned way. We seek (and find) the blend of networking opportunities (face-to-face as well as electronic) that works best for us in light of our personal situations.

It's really not so different from Rosten's characters and their situations.

Here is Eric Hanushek, arguably the most astute scholar on U.S. lower school performance (and what can be done about it), commenting on flat and dismal Pisa scores for U.S. students.  Note that he says U.S. scores have been "stagnant for the last decade". He also addresses and deflects the standard criticisms (excuses) for the status quo that are traditionally offered. Read the whole thing.

Below are data compiled by AEI's Mark Perry on what we pay for this tragedy.  All of this is poignant because the most contentious Trump cabinet appointment to date has been the confirmation of Betsy DeVos. It's telling that her critics charge that she is not from the education establishment. Revealing. They are unaware that they cite her most distinguishing qualification. 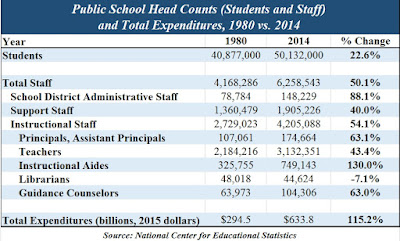 Vouchers would not destroy the public schools.  Rather, all schools would be incentivized to earn their public subsidies rather than receive them as an entitlement. There is nothing like competition and innovation. Both have been missing. This is why we have the sorry mess we are in.  Let 100 (actually many more) flowers bloom.

Here is the WSJ's Daniel Henninger explaining how and why those who live and breathe "social justice" are obliged to show their true colors on this issue.

ADDED From a Feb 10 Ed Glaeser WSJ book review: "My preferred course would be a single-minded devotion to skills—learned in charter schools and on the job and at the breakfast table and while sitting patiently in a house of worship ..."  From Edward Conrad's The Upside of Inequality: "Today U.S. growth demands properly trained talent ..." (p. 13).

As always, how we we get from here to there?

Globalization, immigration, and trade hit some Americans hard and many turned to Trumpian populism.

Here Russ Roberts interviews George Borjas to discuss Borjas' We Wanted Workers (which I have not yet read). Early in the conversation, Borjas explains "we wanted workers but we got people" is closer to the real experience and complicates the story way beyond the simple economic models.

The conversation is, as always, useful and enlightening, but the two economists hit what are in my view two dead ends. First, they wonder whether rather than limiting immigration, can native workers be better prepared to compete? Both men favor "better education." But how will that happen?  American kids have been posting lousy Pisa scores for as long as I can remember - no matter what is done or what is spent on the schools. And which Trump cabinet choice is in trouble at this moment? Betsy DeVos who promises to be the first Secretary of Education not in the pocket of the education establishment -- which is why she is in trouble. So much for the education fix.

Elsewhere in the conversation, Borjas and Roberts note that immigrant assimilation was once the choice of most immigrants as well as of most Americans. But no more. "Melting pot" is now a microaggression on some college campuses. Yes! Not a bad joke.

Tribalism around the world accounts for countless deaths and wars.  Coming to America as way out of tribalism was the great American achievement. It never meant that ethnic ties would be lost.

But identity politics and confusion now reign and we have lost something notable and precious.

Those still puzzling over the Trump win might reflect on political correctness jammed down our throats for years. The Ft Hood shootings were simply "workplace violence". Yup, and we're all stupid. And the geniuses who came up with this tactic knew what they were doing. Not really. What we do know is that they will be puzzling over (and writing about) the Trump (who I did not support) phenomenon for many years.