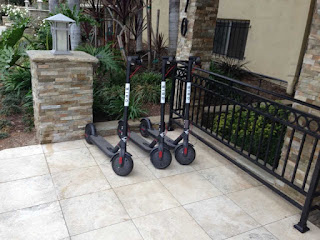 As I was coming home this morning, I noticed a nice young man unload three Bird rentable scooters in front of my building. (There are many other such brands around the U.S.)

How did the company know where and when and how many of them to leave?  It is economists' favorite story. Supply chains are long and complex and in good part impersonal. They also involve entrepreneurs and managers who continuously strive to learn and update probabilities -- and adjust (trial and error) their choices accordingly. Repeated an uncountable number of times, this explains our prosperity.

Will Bird (and the others like it) survive?  I have no idea.  I am not an owner (by choice) and follow them with interest, occasionally cheering them on.

In spite of our prosperity, we manage to survive in spite of all this awfulness. We generate ever larger public deficits because we can, because the world still buys and holds U.S. debt. You just have to remain the world's tallest pygmy.

How Bird works.  Many eyes on the street.

Historical grievances are (unfortunately) nearly universal. They can lead to lasting conflict, much of it involving war and genocide.  What makes it all much worse is the practically irresistible temptation for politicians to fan the flames. Grudges are hard to leave behind. Widespread U.S. identity politics is only the latest version.

Obama supporters had hoped for a "post-racial" administration but quite the opposite happened. Here is a panel discussing whether PC elected Trump.  This morning's WSJ includes an editorial about protests at George Mason.  Are Trump supporters sending thank-yous to the protesters?

Here is the story of a race-predicting algorithm used by the Obama administration to identify bias in auto-lending by looking at surnames and addresses. Systematic bias is a problem to be addressed. But base the allegations on such algorithms? Slippery slopes? Is no one embarrassed? Scared? I am wary of allusions to Nazis but the problem of identifying Jews was (still is) resolved by looking for "Jewish-sounding" names.

Political crusades can lead to awful outcomes.  Once upon a time, James Madison and friends saw the threat and wisely concluded that less government meant less politics.  And that this was the only way to go.

I am greatly enjoying Jonah Goldberg's Suicide of the West: How the Rebirth of Tribalism, Populism, Nationalism, and Identity Politics is Destroying American Democracy.  We are moving backwards, back to tribalism, via our identity politics. The author reminds us of all we are giving up.
Posted by Peter Gordon at 5/12/2018 11:13:00 AM