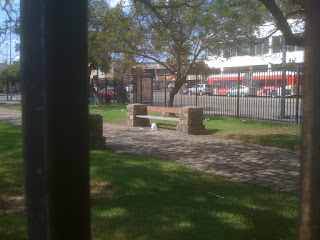 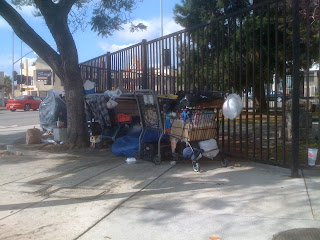 Most of us like green spaces to break up city drab.  Here are two photos taken at a location about 1.5 miles from where I live (not a poor area).  The City had created a small pocket park which quickly became an encampment.  The City then closed off the place with a permanent encircling locked iron fence.  A never used park bench is visibile in the top photo.  A mini-encampment then bloomed under a tree just outside the fence (bottom photo).

Parks and green spaces are universal favorites, but advocates are almost silent on why we have so few.  Not only do we not have ideas or policies that address the problem of street people, but we rarely even discuss what we might do.

Until we gain the nerve to seriously address the problem, let's put all the other discussions on U.S. big cities on hold.  We routinely counsel addicts to get past denial as a first big step.  The folks who write learned essays about the problems and prospects of large U.S. cities should do the same.
Posted by Peter Gordon at 10/21/2012 02:32:00 PM