Do the Bourgeois Virtues make us better people?  Do they make us less nasty?  Less tribal?  Less cruel? Less murderous? I learned about some of this from Benjamin Friedman and also Steven Pinker.  It's an appealing idea.

But just as you want to buy into it, you should think about 19th and early 20th century Europe, when and where many of the decidedly bourgeois were overtly or covertly beyond nasty.  McCloskey (p. 146) writes, "I suggest that German Romanticism was the detour." 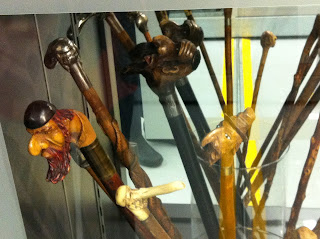 I had kept this report from the NY Times on some of the historical artifacts of anti-semitism. The first paragraph mentions, for example, ugly caricatures of Jews on the handles of walking sticks, ones used by the good citizens of Vienna in the early twentieth century.  These things are daunting when viewed up close.  I am attaching a photo taken on a recent visit to a Viennese museum. Such were the signals that the urban dandies of their day wanted to flaunt.

I cannot do better than McCloskey. Our theories and stories are subject to detours and outliers.
Posted by Peter Gordon at 1/04/2013 07:39:00 PM