In the time of pandemic, changes that had been underway speed up. People adapt and change a little faster, technology adapts and changes faster, even the rules-of-the-game change and adapt. The three prompt each other.

Rules-of-the-game involves politics and is the most sluggish of the three. The first two are dynamic and involve trial-and-error learning. (There is always some path dependence.) The third corner of the triangle, institutional change, involves all the problems of public choice. Early pandemic CDC and FDA missteps are well known.

But all three changes tug on and constrain each other. Even the severest critics of markets should (perhaps) appreciate the speed at which tele-medicine, remote work, on-line teaching and meeting as well as new modes of shopping have developed and adapted in just weeks. Hotels, restaurants, airlines, are scrambling to find new ways to perform and earn trust. Where will they be in two more months -- and beyond?

If you thought that less than 50 years from the Wright Bros. to the moon landing was fast, don't even think about long-run forecasts and what futurists say. Peak oil and peak population never came. Long-run sustainability is a worry if the world is static. But one lesson from the last two months, for those who need reminding, is that it is not static. 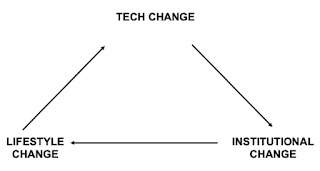