Cities and the evolution of transactions costs

In her big-themed and important Bourgeois Dignity: Why Economics Can't Explain the Modern World, Deidre McCloskey covers a lot of ground. She takes on most of received economic growth theory; she takes a strong stand in favor of culture over institutions as an explanation of the "hockey stick" bend in economic well being that we often simply refer to as the "industrial revolution" and she evokes Austrian economists' emphasis of entrepreneurial discovery as an important force in economic growth explanations.

The author also offers a schematic (her Figure 4, p. 409) that collects most her her ideas on a single page. (The diagram is too complex to display here).  But I think she misses some essentials when she mentions on page 406 that cities simply belong to the "background conditions" that were always around.

Having noted the importance of entrepreneurial discovery, she has to wonder how that happens. Urban Economists (see, for example Ed Glaeser's Triumph of the City) now almost routinely cite cities as the places where the interactions by which ideas are discovered and incubated take place. My quibble with the standard view is that "density" is too often used as the convenient proxy for how all of this happens.  Rather, I believe, entrepreneurs (and everyone else) seek propitious locations from which they expect they can best execute all of the activities they are involved in. Each of us participates (as buyer and/or as seller) in numerous supply chains. I include supply chains for ideas. Seeking and finding propitious sites for all of this activity is actually the way we deal with transactions costs. Modern cities (with flexible enough land markets) and modern networks (electronic and other) represent where we are in the ongoing evolution of transactions costs.

A schematic that does it for me is one suggested by Cowen and Tabarrok (below). They place "organization" at the center. But organization can be many things.  I suggest that spatial organization belongs side-by-side with industrial organization. When the make-or-buy decisions are made, where to make or buy are made concurrently (nearby or not? how nearby?).  The evolution of transactions costs affects all of them. 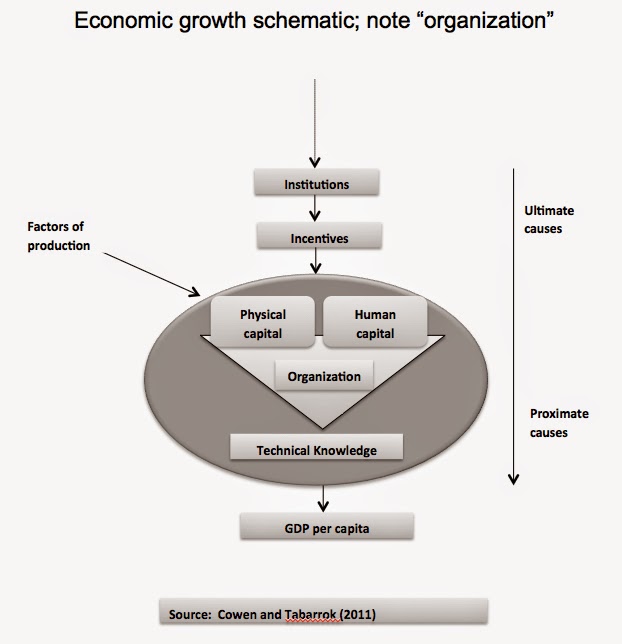 Cato Unbound has a nice exchange re the "sharing economy."  Efforts to lower transactions costs now getting a powerful boost from app technology.
Posted by Peter Gordon at 3/03/2015 02:12:00 PM